Dustie-fute, the Scottish incarnation of Orpheus, is a figure I first encountered in 1992 in an edition of Gairfish magazine entitled McAvantgarde, in which I had an article discussing an apparent recrudescence of poetry in Scots. The sequence of poems entitled Dustie-fute was published as a pamphlet by Vennel Press in the same year. Some of that collection was written in Scots and much of it was engaged with Scots as a literary possibility. The first piece describes Dustie-fute as:

at a loss in the empty soul of his ancestors’ beautiful language and in the soulless                       city of his compeers living the 21st century now and scoffing at his medieval wares.

Kinloch was part of a group of highly academic Scottish poets, including Robert Crawford and W.N. Herbert, who were pursuing a literary and, in some ways, highly artificial ‘synthetic’ Scots which allowed these poets at that time to produce innovative and exciting work. Interestingly, most of what I take to be the new writing in this more recent collection is in English. However, as in the earlier work, the perspective is international and European. Kinloch has spent much of his academic working life as a specialist in French literature although he is now Professor of Poetry and Creative Writing at Strathclyde University. His poetry has always looked outwards, away from England, towards France, Europe and then America. His early Scots poems, some of which are repeated in this latest collection, flaunted their European and modernist or avant-garde connections:

he cam fae a fremmit land,

had kent thrist an the watter o Mairch bere

his feet I the wey of the slaw stour o eternitie.

Identity is fluid in these poems; sometimes the poet seems to be Dustie-Fute or Orpheus, sometimes looking for him. As the title suggests, the collection is a search for the lost beloved, be it Orpheus or Eurydice, be it male or female:

he could see her- or him –exactly.

Yes, it was him

that is his nose

I had not realised before that Orpheus was known as a lover of boys, having been so bruised by his love of Eurydice that he foreswore the love of women. That is one version of his story. In the better known one, he dies torn to pieces by women who were unmoved by his songs and who were angry with him for disturbing their Thracian rites, apparently similar to Dionysian orgies. A very strong theme of the collection is the celebration or memorialisation of the lost, the doomed and the dead; the poet is searching the underworld. At the centre of this trawl through the shades is the experience of being a gay man who has lived through the AIDS epidemic alongside those who did not survive. Kinloch devotes almost ten pages in the heart of this book to a prose piece which combines the discussion of a photograph by A.A. Bronson with a personal memoir. The piece is topped and tailed by a poem that the poet acknowledges isn’t new: `It is also a fact that I can’t get beyond this image in my overall response to the series of portraits I have been writing about.’ The photograph shows the artist’s lover just after his death from AIDS. 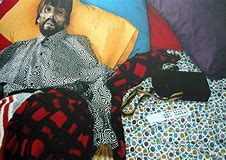 The photograph, with its patchwork of colours “reminds the viewer of the great AIDS quilt begun in 1985 which now comprises some fifty thousand woven panels, each one commemorating an individual who has died”. This is carried through into Kinloch’s poem in the imagery of stitching: “You thread a sea with your eye”,”trees…wrap your quilt in foliage”, your passport head is pinned in silk.” However, the poem also refers to Orpheus, specifically, to Rilke’s Sonnets to Orpheus:

trees that hung your voice

wrap your quilt in foliage;

a dog barks through the branches

across the sunlit patches;

As Kinloch says, this is a “tortured echo of the Rilkean tree that ‘surges’ in the listener’s ear.”

Kinloch has written about the AIDS quilt before and this poem may be a very successful refashioning of the poem ‘Needlepoint’ in the original Dustie-Fute sequence.

The notions of dismemberment, wandering and water recur throughout the recent volume, from the opening poem featuring a giraffe in a Paris zoo, out of place and threatened by floods. He is a figure of Dustie-Fute and of Orpheus, whose severed head in one of the versions of the myth floats downstream, still singing. An echo of the myth can be heard in the penultimate lines of the poem:

hooves of all the little people

bob among the eddies;

root among the waves.

The second poem, The Parawd o Dustie-Fute, mixes Scots, colloquial language and standard English and includes in its procession a number of endangered species, such as the Aye-aye and the Dhole, whose names are as strange as their characteristics. Some of these miniature portraits are more successful than others; the one entitled ‘MAN’ seems like rather feeble eco-prop, not enriched either by the colloquial ‘pure mingin killer’ or the only bit of Baudelaire everyone knows. In contrast, the tragic image of Dustie-Fute as either a diseased tree or a victim of AIDS is much more convincing, and it is not surprising that these lines feature on the back cover of the book:

It would be interesting to know whether this is in fact a new poem, or another retrieved from the search of the past.

‘Installation’, like ‘Felix, June 5, 1994’, is a poem based on an artwork by an American artist memorialising his dead partner. It is a poem which works by translating the coloured tablets (or sweets) into the Scottish sweeties of childhood, thus making a real connection between the poet’s world and the transatlantic one of the artist. 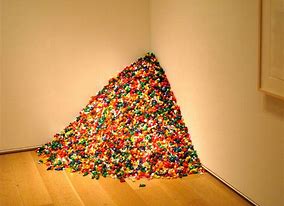 ‘Untitled’ : Portrait of Ross in L.A. by Felix Gonzales-Torres

A number of other poems are also based on artworks by American, usually gay, artists, often featuring very beautiful, very erotic images of young men. I find these poems more interesting though more mysterious than the, to me, somewhat strange preoccupation with figures from the Old and New Testament. Perhaps I’m missing something. The last two poems in the book, however, are very powerful and very moving. ‘Orpheus. Eurydice. Hermes’ is a reshaping of Rilke’s poem of the same name in relation to a photograph by American artist, PaJaMa. The characters become a photographer, a nurse, or a woman dressed as a nurse and another, who should be Hermes, but who seems more like Orpheus or Dustie-Fute. At the end of the poem, it is this figure who retreats to the underworld under the eyes of the photographer/poet who now enters the poem in first person:

dark before the rain-spattered exit,

I or someone else stood. You could not make

me out. I stood and saw

how, on the single track over

the machair, with a sad look,

already walking back along the path

to the vast absent view, his footsteps

echoless, so gentle, so patient.

This poem is successful on its own terms; it is enriched by being read against the Rilke and by looking at some of the photographs of PaJaMa. The last poem in the collection, ‘Text’ strikes me as being bang-up-to-date, believably in the voice of a poet for whom references to Cavafy and Rilke are as much, or possibly more, part of his personal vocabulary as the Scots diction which features in other poems.

So what about the Scots, then? Reading the current issue of Irish Pages[2], I learn that the old debates rumble on. Scott Hames’ article, ‘On snottery weans forever: against dreichism’ inveighs against what McDiarmid referred to as ‘kailyard Scots’. Hames claims that the use of Scots has become a shibboleth, and that “ To most readers in Scotland today, a poem in Scots may as well have no content at all, its linguistic envelope conveying the totality of its possible interest or “message”, largely reducible to heritage or nationalism.’ He goes on to consider different reasons for writing in Scots, as advanced by Scottish writers and draws a distinction between those who include Scots in their writing because it ‘comes naturally’ and is part of the language they daily use and those, on the other hand, who value ‘the strangeness and otherness available in Scots.’ It is, unfortunately, an argument which matters more to those inside Scotland. Outsiders might view the use of Scots as an ‘eye-snagging’[3] barrier to understanding. Kinloch’s use of Scots is anything but ‘kailyard’ as he bumps it up against contemporary life and culture of Europe and beyond. However, he would seem to be using it less than in the past, as if the point about Scots and the avant-garde had been made and no longer needed to be laboured. In any case, given the provision of a useful glossary, the reader does not have to work any harder on these poems than any of the others and may be reassured that the effort put into reading this collection, whether translating the Scots or researching the art, will be rewarded by the encounter with a vision which is melancholy, but ultimately affirmative.

[1] Both Martyn Crucefix and Don Paterson have produced brilliant translations of Rilke’s work.

writing about writing (and reading)

I am not a silent poet